Went to a Storage Auction and came home with experience.

I had been to an auction before. I'm still selling the books from that venture.

Yesterday I bought Glendon Cameron's book about storage auctions and read 2/3 of that.

(I bought 2 of his books separately - they are very informative, yet entertaining. Buy all 3 here and get a deal.)

I had to sign in. Didn't expect that. Had the good sense to use my Google Voice number. Forgot the phone with that number though. Discovered I forgot my wallet too! They said I did not have to show ID if I won but they gave me "a look." Had my "big bucks" in my pocket though.

Waited in my car and came into the office 5 minutes before. I expected to be despised and ignored. It wasn't too severe. Haha.

There were about 10 other guys - no women. Most of them looked like people who could size up and move (sell) a lot of crap - quick.

My lantern flashlight with the big square battery didn't work in the car. The small one I took was pathetic in real life. I used the technique of looking with other people's beams.

I remembered to look under the stuff at the floor. 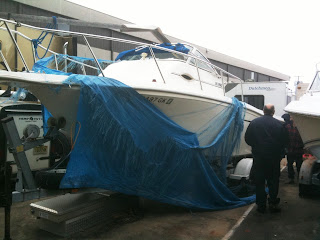 14 feet comes to mind. No title for it so you have to sell it for parts. Could you register it in another state? Doesn't matter, I can't tow it with a Ford Escort. Note the silver colored metal truck tool box under the boat? What are those worth. Some one opened the lid of the silver box an inch or so.
There was water in the boat from storms. Went for $850.
Then we went to locker 3 - a 10 x 15. A nasty stained mattress almost plopped out - like a diseased doughboy. Guys started making jokes about bugs. Some woman showed up on the fringe of the crowd. She was looking to get some of her stuff back.
Bugtussle went for $525.
Off to the last one. A 5 x 5 with a few sad little boxes. Looked like some Christmas stuff. Went for $55 after the auctioneer started at $25 and someone bid $10.
The guys who bought stuff looked like regulars, and some of them knew of each other. There was to be another auction of 2 units in an hour and a half at another place. The guy I was supposed to meet popped up out of the shadows. He got there late, and we have thought about doing this together.
I bought a unit of books before - and I still haven't listed or sold all of those. I remember buying that unit in November and cleaning it out in the cold and dark with The Mrs.
That was BEFORE I messed up my back and spent $16,000 on surgery.
Came home and ran into my neighbor Mr. K. He did storage auctions for a year or so, and told me about the need for space and the profitability of furniture sales.
I'll go back to another one. Going to work on a business plan before I jump into this. Planning - for a change!

You can play with the app or just win Bitcoins over the web on a browser. Play on the browser and play an added game where you can bet Bitcoins and win more! http://freebitco.in/?r=1795747